Located 20 miles northwest of Knoxville, Norris Dam State Park has more than 4,000 acres of natural lands situated around Norris Lake, the site of one of the TVA’s grandest dam projects. The lake is popular for water sports, including boating and fishing. Also, it has a fairly extensive system of short hiking trails – so Camping and hiking in Norris Dam State Park can be a great Idea.

The state park is divided into two sections, each with a number of hiking trails. There are forty campsites in its eastern 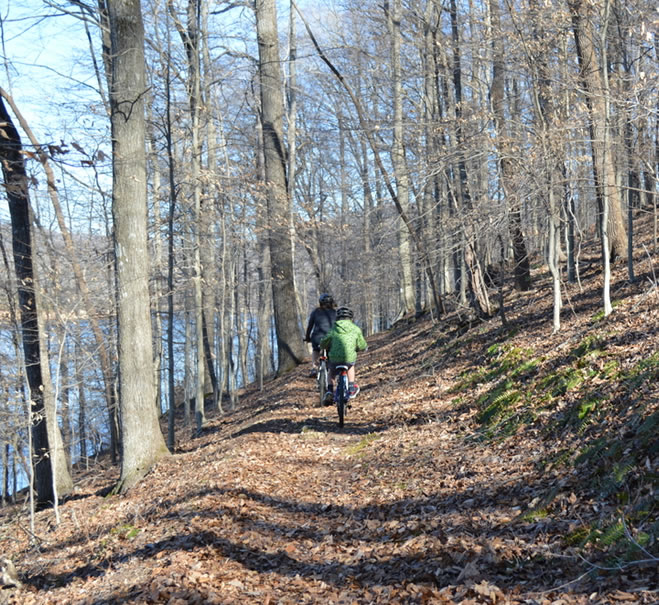 Norris Dam was built by the TVA between 1933 and 1936 as a unit of its multipurpose system of dams. It is 1,860 feet long and 256 feet high. To get more views on the TVA’s system of the dam, the most picturesque place would be the overlook on the west side of the dam in the TVA Small Wild Area, where a plaque and may explain the entire twenty-eight-dam TVA system.

The view of Norris state dam park is inspiring, with the mist and the tree colors reflected in the large lake, with clouds often just touching the tops of the surrounding hills.

The operation of TVA dams helps control floods, generates electricity, and regulates water flow to maintain navigation depths on the 650 miles of the navigation channel on the Tennessee River.

Norris Dam State Park is adjacent to the 125-acre TVA River Bluff Small Wild Area, which has some old-growth hardwood, steep bluffs along the Clinch River, and an abundance of wildflowers due to its unique location.

It gets steady moisture from the river, and the temperature of the water maintains a constant 46 degrees in the valley against the bluff. There are more than 100 species of wildflowers in the Norris area, and fifty to sixty of these can be seen along the 3.1-mile trail located in the TVA River Bluff area, described here as Hike 25.

Peak season for flowers is from late March to mid-May, with some late bloomers. The TVA trail system also includes the 0.5-mile Deer Trail, an interpretive loop, and the Songbird Trail across the Clinch River from the River Bluff Trail, which is marked 0.8 miles, but also described as 2 miles long.

It is known for its birding opportunities. The Songbird Trail is located at the entrance to the canoe access, downstream from Norris Dam, and has a wide flat path. This is a shaded level stretch where people using wheelchairs can enjoy a variety of birds. It also has benches where people can stop to rest.

The east side of Norris Dam State Park contains the 0.7-mile Lakeside Loop, the 0.5-mile Christmas Fern Loop (these ferns are green even in winter and have a nice display of spring wildflowers), and the 0.5-mile Tall Timbers Trail, with yellow poplars more than 100 feet high. The High Point Trail system has 3.7 miles of trails leading into another system of more than

15 miles of trails in the Norris Watershed area, which is open to mountain bikers as well as hikers. If you are looking for better enjoyment and safety, you can take proper gadgets and guides of hiking before the trip.

At the extreme west end of the park is the Andrews Ridge Trail System in an area that was cleared for farmland until purchased by the TVA in 1935, displacing some of the 3,500 families relocated for the dam.

Andrews Cemetery can be found at the loop end of Andrews Ridge Trail, 2.8 miles’ round trip in length, and is one of the only remaining evidence of these former residents.

This area also includes the Rock Creek Loop Trail, a 1-mile loop which is good for spotting wildflowers, the 0.4-mile Sinkhole Trail, which shows erosion from former farming practices, and the 0.6-mile Hooting Hollow Trail. Near park headquarters in the west end are another three short trails 0.5 miles long or less.

The area has squirrels, groundhogs, skunks, and many species of birds, as well as white-tailed deer. Herds of fifteen to twenty deer are often seen below the dam in the early morning and at dark. It is against the law to spotlight the animals (such as flashing headlights on them). Park officials report forty to fifty accidents per year in this area involving motorists and deer. These collisions can cause serious damage to vehicles and personal injuries.