Our fascination with jewellery, dates back to the Indus valley civilization. India is a grand old nation that has seen the rise and fall of countless empires, and with them, the rise and fall of umpteen cultures and traditions. We have a glorious past of exceptional craftsmanship, ages when our incredible artisans have together sculpted what could probably be the most recherché jewellery collection in the world. Even as technology and machines have replaced craftsmanship today, a few craftsmen did survive to pass on our invaluable tradition and techniques of jewellery making to newer generations. Today, antique jewellery designs are the royal remains of our sensational past. Let us take a look into these stunning treasures conceived by the most brilliant artisans of bygone eras that have gracefully stood the test of time. 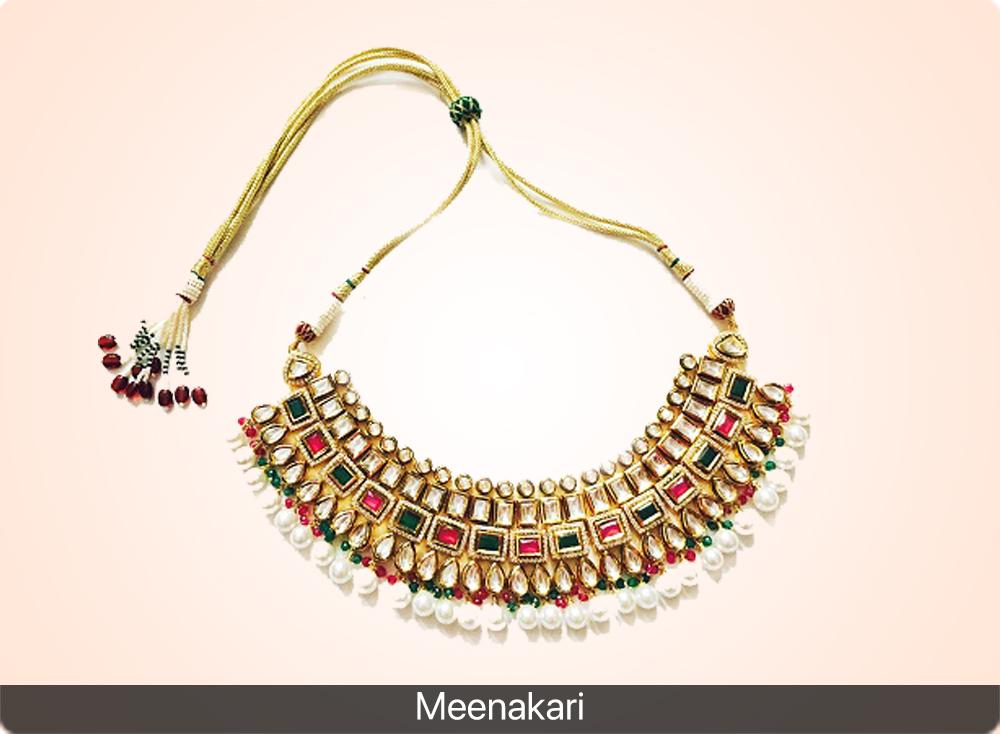 Meenakari: Adopted in India by Raja Man Singh of Mewar, Meenakari is the exquisite jewellery that once donned the royal damsels of Rajasthan. Originally brought to India by Persians, Meenakari jewellery making is one of the most complex and intricate methods used in jewellery creation. The name “Meenakari” is derived from the Persian word Minoo, which means “azure colours of heaven.” Meenakari jewellery goes through the hands of 7 different craftsmen before completion.

It is first designed by the naquash, who is the first in line. After it is designed, it is then passed to the sonar, who is the goldsmith. From the goldsmith, it is then passed to the engraver, kalamkar, who engraves patterns and designs as designed by the naquash. After the engraving is done, it then goes to the meenakar, who is the enamalist. After the meenakar adds colour, it is then passed to ghotnawala, the polisher, and then to jadia, the stone-setter when there are any stones to be added to the jewellery. When all these stages are done, the jewellery is then handed over to patua, the stringer, to apply any final touches. Like in the old times, traditional Meenakari goes through these same processes even today, and is one of the most esoteric arts of all times.

Kundankari: Kundankari jewellery originated in the 19th century, in the palaces of Rajasthan and Gujarat. This form of jewellery making later flourished in the courts of the Mughals. Kundankari incorporates the royal beauty of diamonds, emeralds, rubies and other precious stones and glass pieces in a metal base, and is one of the most sacred arts of all time. Kundan jewellery goes through arduous processes called ghaat, padh, khudai and pakai. In the initial stages, a framework is made of metal to which wax is poured. The most important part of Kundankari is the glistening stones and glass pieces that are skillfully fixed and bound together by thin gold foils.

Kundan jewellery may also feature meenakari designs on the metal base along with its signature embedded precious stones. Kundan has dominated the Indian market for a long time, owing to its antique charm and ethereal dazzle. Centuries after its origin, Kundankari still remains to be a royal treasure 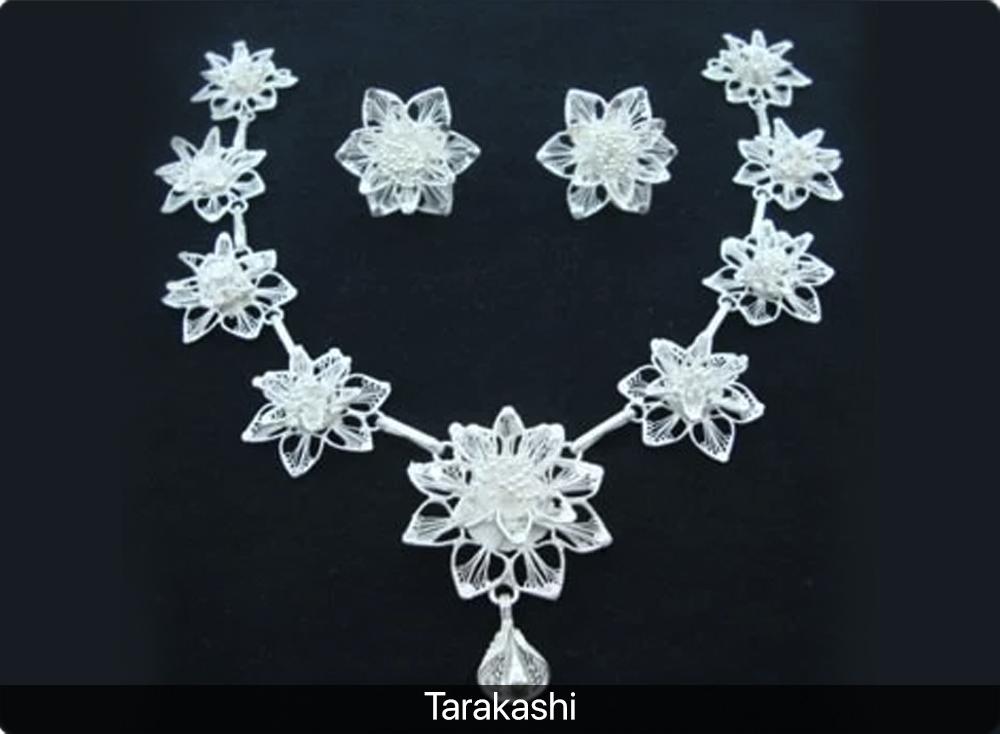 Tarakashi: Tarakshi is a 500-year-old form of jewellery making that still flourishes in Orissa. Tarakashi jewellery is delicate and uses interwoven metal wires to form light ornaments. These ornaments often have a lace-like appearance. The processes involved in the creation of Tarakashi are entirely different from Meenakari and Kundankari, as here, silver or golden threads as thin as hair are joined together to create shapes. As Tarakashi requires extremely thin metal wires for its creation, it is usually made only in gold and silver as these metals are incredibly malleable and ductile. Tarakashi jewellery making requires great precision, skill and craftsmanship. This type of jewellery is extremely feminine, and the intricate designs of Tarakashi charms our damsels. 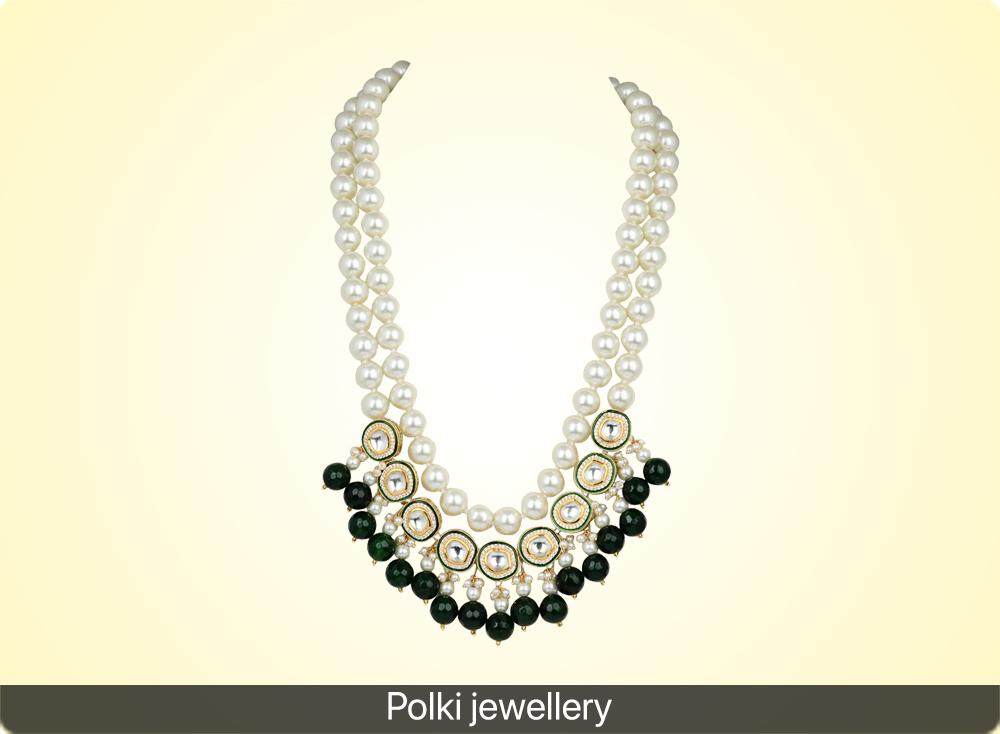 Polki: Polki jewellery is made of uncut natural stones and has quite an elite status. Polki jewellery is very similar to Kundan and is made by fixing precious gems on gold. The process of crafting Polki is almost the same as that of Kundankari, but the difference lies in the stones used. While Kundan jewellery uses glass and precious stones, Polki uses only uncut natural diamonds. This makes Polki very expensive. Actual costs of Polki jewellery vary depending on the carat of the diamond, clarity, finish, amount of gold used, etc. Polki jewellery has always been priced on the high end, and is the dream of every Indian bride. Adorned in diamonds, flashing its lustrous charm, Polki continues to transcend time and ages.

Pachchikam: Pachchikam jewellery is the specialty of the Kutch region in Gujarat where it is believed to have developed around the 16th century, but the exact accounts of its origin are unknown. Pachchikam is an alternative to gold jewellery, and is made in silver or platinum, studded with semi-precious stones. The techniques of Pachchikam have been handed over through generations and remain unchanged even today. Pachchikam jewellery looks similar to Kundankari, and is sometimes confused with it due to the presence of elaborate stonework, but Pachchikam has a distinct finish, with an outstanding rough edge to it.

Most of its charm comes from this unfinished look and crude antique-style beauty. Pachchikam jewellery is usually heavy, but still has a place in the wish list of every young jewellery lover. 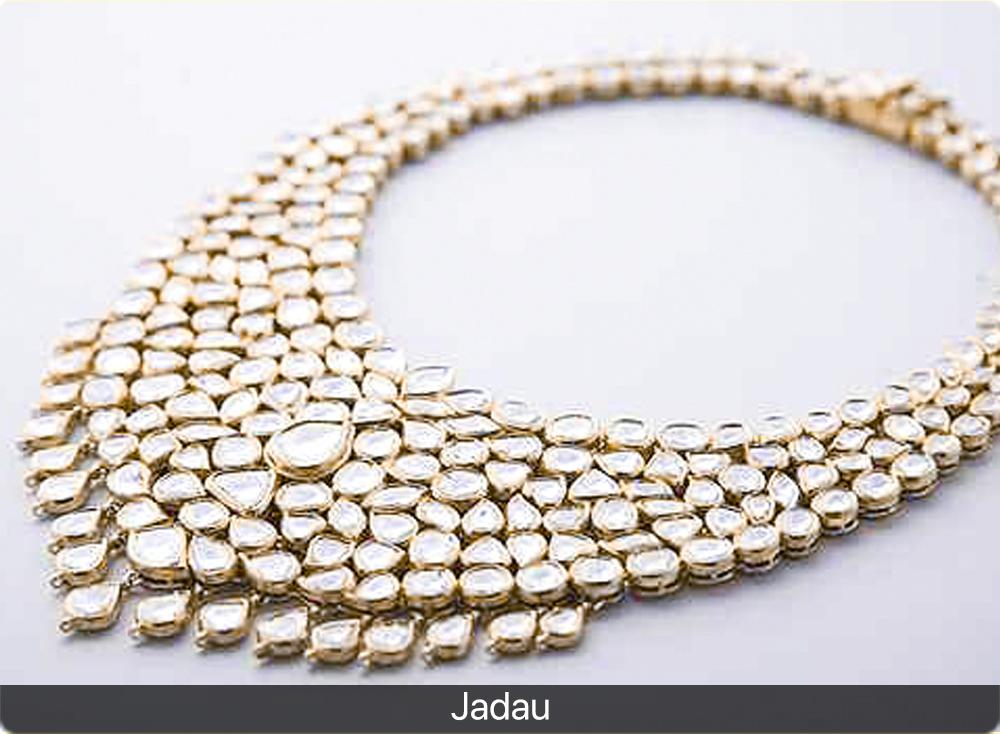 Jadau: Jadau technique developed during the Mughal period and later flourished in Bikaner and Jaipur alongside Kundan jewellery. Jadau is in many ways similar to Kundan and its creation also involves many stages. Once the stones used in Jadau are embedded on the metal base, Jadau also uses Meenakari technique to enamel the reverse side of the jewellery. Feminine and graceful, Jadau is usually pricey, but continues to charm the Indian bride.
Related ItemsBirthstone JewelryBuy Kundan RingsDiamondDiamond Engagement RingsJewelryShop necklaces online